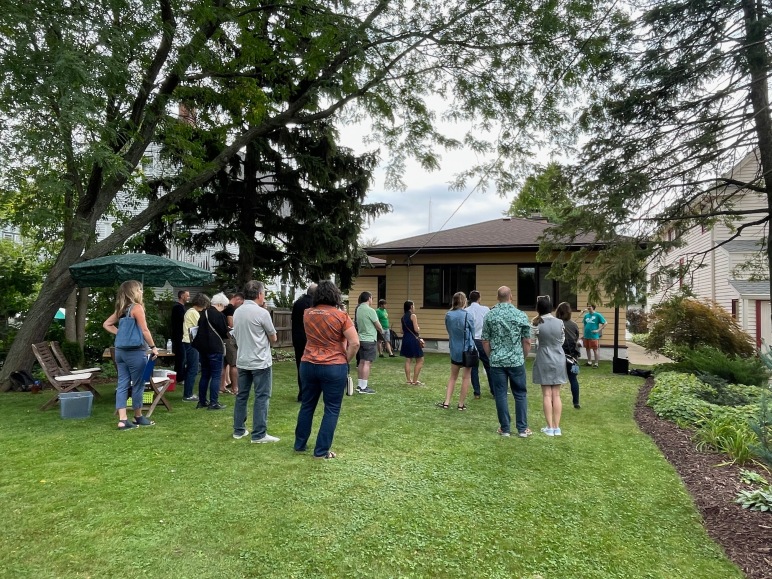 We had a wonderful time! MPA members are a lively, curious group of hard-working volunteers who love history and architecture and who work to protect and preserve it. And they deserve much credit in their efforts to save iconic places, including the Mitchell Park Domes and the Milwaukee Soldiers Home. Please support the MPA*!

MPA members visited us to learn about Frank Lloyd Wright’s Elizabeth Murphy House and the nearby neighborhood to see a few of her descendants: Shorewood homes designed by Wright’s former assistant and local architect Russell Barr Williamson.

The almost 4-year Wright/Williamson relationship ended mysteriously in 1917, right here. We discussed what we know of that historic drama and how it has rippled through architecture and affordable housing in America ever since.

For example, after they split, Wright found celebrity as the world’s most famous architect by claiming the role of artist, while Williamson became an enigma – a talented but behind-the-scenes designer largely ignored in the history books. Their separation, while complex, was partly based on preservation – or the potential lack of it – the risk that there might not be cause to preserve a place made generic by architectural anonymity.

Wright designed over a hundred and twenty modest American System-Built Homes (ASBHs) to be sold by the developer Arthur L. Richards anywhere and to anyone, with Williamson representing Wright as draftsman. But Wright quickly cancelled the program with only twenty or so homes built and filed away the drawings forever as soon as he realized that his art would not be preserved if its occupants didn’t themselves participate in the preservation. He recognized that when folks were not engaged in the design of their ASBH home, the art and artistic pedigree were deemphasized if not devalued, so the need to protect and preserve the work was lost too. ASBH homes (and therefore Wright’s architecture) were often adapted (Wright would say “hacked-up”) as soon as they were occupied. This was a lesson lost on Wright’s assistant Williamson who didn’t block and may have supported some of those revisions. Williamson didn’t last in Wright’s studio and was on his own as soon as the ASBH program ceased to exist.

Shorewood is where Wright learned a vital, subtle and prescient lesson; that we don’t preserve what we don’t adopt as our own. We need to know why something is the way that it is in order to commit to protect it. So for the rest of his career, Wright emphasized the why with both his apprentices and his clients.

Ironically, Shorewood is having its own conversation about preservation. When an historic Shorewood home designed by Eschweiler was purchased and torn down by a tone-deaf local politician seeking a lake view a few years ago, many Shorewoodians demanded that village leaders act to prevent another tragedy. The conversation, we fear, has been incomplete. Surveys and presentations indicate that a top-down approach is under consideration, focusing mostly on rules and bureaucracy that may, in this writer’s opinion, delay vital preservation work and increase costs, risking some of that work altogether. Shorewood already has a muscular Design Review Board. Should we add more oversight by overseers from outside the village? Importantly, the why has become foggy. Are we preventing demolition of cultural icons, are we creating incentives for upkeep, or are we policing paint colors and shingles?

The Village of Shorewood is itself historic – a relic of a transitional time, when folks were moving to cities for jobs, public schools, public parks and public transportation, where they built close-knit community with their neighbors through leisure, work, sport and spirit. Shorewood is a microcosm of an idyllic American idea – that people might live densely, happily and cooperatively. The thesis is that humans find purpose when they settle disagreements through compromise and friendships when they gather together despite differences to solve problems. This is how Shorewood was planned and how Shorewood mostly remains. Indeed, citizen stewardship is how the village has survived the last century and is why it thrives for many today**.

So we’ll be representing Frank Lloyd Wright and his formula for participatory preservation at upcoming Village Trustee meetings. I’m relieved to report that Village President Ann McKaig promises a expansive conversation and that trustees should listen strategically, not reactively. We hope they’ll take seriously the culture of voluntary historic preservation that has held Shorewood together for the last century. We also hope the Village Board will consult the amazing volunteers and expert staff at the Milwaukee Preservation Alliance to consider all the tools of preservation, which may include ordinances, easements, overlays and good-old citizen engagement.

Thanks to Jeremy Ebersole at MPA and the Jeremy Jannene at Urban Milwaukee for a wonderful event!

Here are some images from MPA’s president Peter Zanghi:

And a few beauties by Joselia Meniolea:

*We have no affiliation with MPA other than friendship.

**This isn’t to say that everyone benefited: Shorewood sits on land once revered by Native Americans. It is unlikely that they chose to leave. And for many years, some of Shorewood’s homes and institutions were off limits to people of color. However, many Shorewoodians are working to recognize and address inequity and today we live in the most densely populated and diverse square mile in Wisconsin. The schools, for example, support two dozen spoken languages. Credit, in part, our century-old housing stock; a mix of modest single family homes, a large population of duplexes (wealth-creators for America’s 20th century middle-class) and many apartment complexes, though affordability has always been a challenge.