A proud wide chimney adorns the roof on the Elizabeth Murphy House. Up close, it is a thing of beauty: large hand-soldered copper panels tie a massive superstructure to cream city bricks. You can see the copper panels from space. As with other prairie-influenced designs, the chimney sets the tone for the rest of the house. It is intentionally dramatic, like Frank’s fine pork pie fedora. It is also a fake. A facade.

It took a visit to the attic to uncover the dirty secret. That, incidentally, was no mean feat. While the house would get an inflated chimney, it wasn’t designed to have an attic at all.

This American System Built House (A203) was one in a family of designs with similar footprints that had either a flat roof (A201), a gabled roof (A202), or a hip roof (A203).  The design drawings below show the concepts as drawn by Mr. Wright, but flipped, to allow for an optional left side front door. 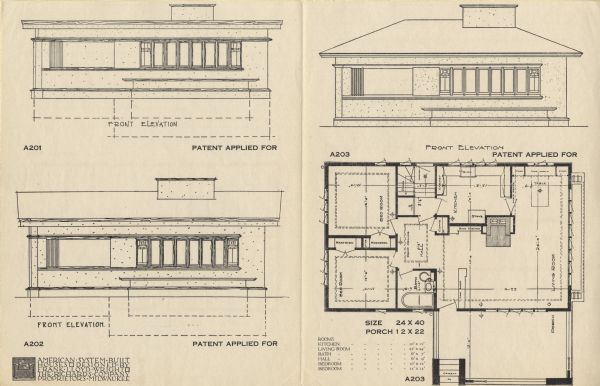 Key is the fact that a flat roof might be available at all, squeezing out any attic. So Frank didn’t draw an attic door. But this hip-roofed version has a space above the ceiling, so a door was added, perhaps by the builder as an afterthought. (The builder’s stamp is on the back of said door, as if to claim it as his own.) The door is buried high in a tiny coat closet.

We had done a structural inspection of the attic space while looking at the house before buying it, but today’s visit was to uncover more clues about the house. Most interesting: proof that the chimney is all talk and almost no action. It is 480 cubic feet of theatrics surrounding a measly 24 inch brick flue. All form, almost no function. Why?

Frank’s vision for the American System Build Houses was affordable beauty, and this chimney is exactly that: an effort to minimize material and labor costs while making something different, desirable and timeless.

We think that the house would not be the same without its big, fake chimney.

What do you think?

One thought on “For Frank: function followed form”