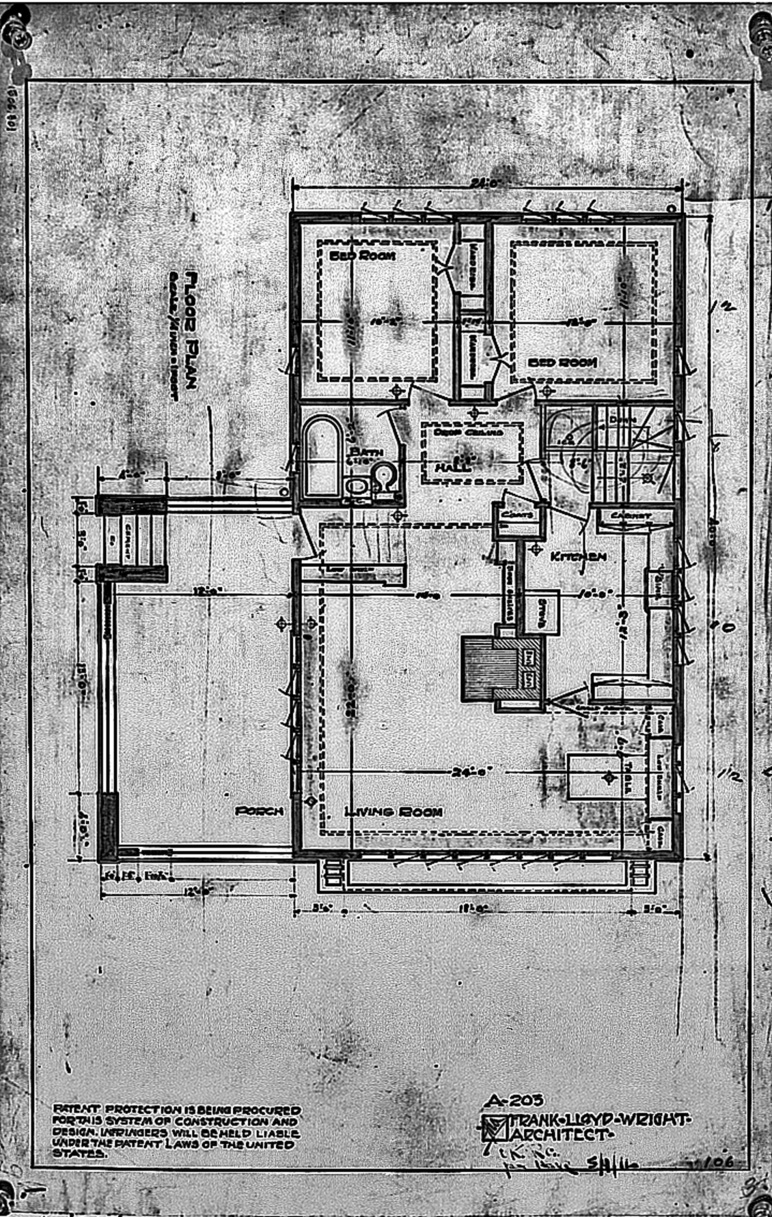 Frank Lloyd Wright’s American System-Built Model A203 (1917-18) is modest: just 960 square feet with two bedrooms and one small bath. But to make the main living space behave much larger, Wright designed an open and flexible floor plan that could be reconfigured for a special occasion, like a holiday party. The original drawings show an “L” shaped Living Room featuring walls of windows all around, a fireplace at the center, and a “breakfast nook” with built in cabinets and shelves and a table and benches that abutted those built-ins. In its drawn position, the table would be a magnet for hungry kids at breakfast time or for a person needing an afternoon coffee break. But when a larger group was to be served, the table could be pulled from the wall, a leaf and three chairs added, and eight or more diners might spread into the space comfortably like a dining hall. It was a bit like reconfiguring a train’s cabin, but on a larger scale.

When we arrived in 2016, the breakfast nook had been turned permanently into a conventional dining room: a large table and tall back chairs dominated almost half of the living space, cutting off the flow of foot traffic, and importantly, blocking views to the outside from near the fireplace and from in the kitchen. But the previous owners didn’t know what they were missing, and neither did we at first. We initially put our table in the center of the room too, directly under the light fixture, which was also in the middle of the room. It took a visit by another Wright homeowner to point out our error. She said:

“Wright wanted the table against the shelves, and if you move it there, you’ll feel the room expand and breathe.”

So we did. And the room did breathe. But it created another problem. The light fixture now seemed to be in the wrong place–too far out into the room. We wondered if the builder wired the space wrong, and if all of the home’s occupants before us had missed the benefits of a reconfigurable space.

Last month Angela found a light fixture that is more suited to the home: a simple box with 5 bare bulbs–replicas of the kind that would have lit the home in 1918. Since we needed to change the fixture, Elizabeth and I ventured into the attic to reposition the circuit to where a lamp would hang over an abutted table. Lo and behold, we found the original framing and remnant wire-races that prove that the builder did as directed and hung the fixture where Wright wanted it. So the home’s first family may have eaten breakfast in their nook and then reconfigured the space for a dinner party later that same day and made it a nook again for the following day.

Here is the same space configured as both a hall and as a nook. (You may note new accent lighting in the built-ins.)

The Elizabeth Murphy House, an American System-Built Model A203 designed by Frank Lloyd Wright, is the protagonist in the new book “Frank Lloyd Wright’s Forgotten House – How an Omission Transformed the Architect’s Legacy“, (University of Wisconsin Press, April 2021.)