Frank Lloyd Wright designed experiences for the people who entered his spaces. One of his most famous experiential tools is called “compression and release.” By creating a deliberately small space through which one must pass before reaching a larger space, he caused a temporary sense of tension, followed by the feeling of freedom. Call it manipulative, but we have seen that it can be powerful. Guests who succeed in finding our front door tend to hesitate before entering the narrow passage to knock. When we answer the door, we often find them wondering if they are in the right place and looking claustrophobic.

The tiny Elizabeth Murphy House boasts two waves of compression and release. The first comes at the porch entryway and porch door leading to the sleeping porch (propped open in this image), and the second comes after passing through the original main door (closed ahead) and through a narrow passageway to the living room and the heart of the house in front of the hearth.

The waves are unmistakable and can be quantified by measuring the space around the person making the journey from the front to the middle of the house.

For the above chart, we measured the changing field of view of a person taking 42 steps from the front outside sidewalk to the indoor fireplace, near the center of the house. For visual simplicity, we’ve summed the space from floor to ceiling, left to right and in front (the range of vision) to show how a visitor’s perspective changes rapidly from large, to small, to large, to small again, and finally, to very large when they stand under a high ceiling with views out windows facing south, north, east and west. The sense of release is most dramatic at the very heart of the house. That, too, was a stroke of Wright design genius and lives today in all who feel it. 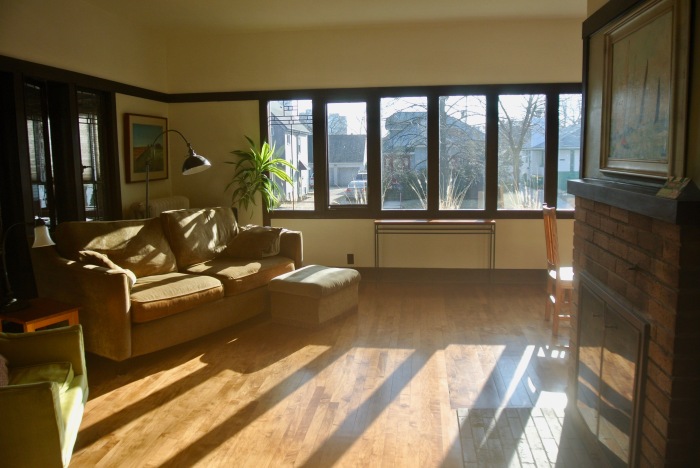